A Week In Uruguay

When people plan a trip to South America, Uruguay isn't usually top of the list of places to visit. Nestled between Buenos Aires and the south of Brazil, this small country should not be overlooked- it is a destination unto itself, and full of diverse and amazing places.

Winter isn't the best time of year to visit Uruguay. Because a lot of the smaller places depend on tourism in the summer months (December-January), they are practically deserted during the winter. Luckily, October is the start of spring, so there was a little bit of activity. It was quiet, but I can also imagine some of these places overrun by tourists in the following months (I think I prefer the quiet!).

So where to begin...our original plan was to enter Uruguay via Chuy at the border from southern Brazil. However, because it wasn't the busy season, the bus from Porto Alegre to Chuy wasn't running and we had to go straight past to Montevideo (skipping by all the places we wanted to see in between). Thankfully, the country is small, so backtracking was only a case of about 5 hours. Our overnight bus got into Montevideo around 7:30am so we checked into our hostel and headed straight to the main square (​Plaza Independencia) for a free walking tour to get our bearings.

Montevideo is a beautiful city and we walked most of it. From the Old City along La Rambla to the "Montevideo" big letters sign near the naval museum.  Some of the top sites include the Teatro Solís, Mercado del Puerto (although a bit touristy for an actual meal), the beaches and the many small squares scattered around the city.

The next day we got the bus (once it showed up 1.5 hours late) the short distance to Puerta del Polonio. We bought a ticket for the crazy 4x4 truck and then took the 40 minute drive in across the sand and dunes to Cabo Polonio. 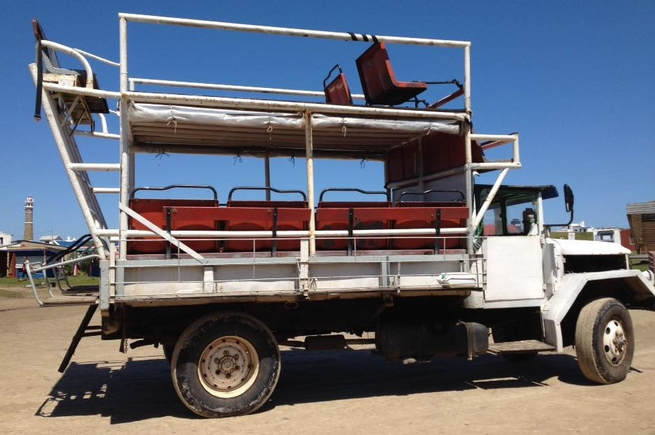 Everyone who visits Uruguay should visit Cabo Polonio. It is such a strange and unique place, and one of my favourites from our entire trip so far. It is like a hippie colony, with sand streets, the cutest old fashioned grocery store, and a few small shops and restaurants. All of the tiny houses are unique and custom built (some look like they were thrown together with whatever scrap material that was lying around). Only about 100 people live here permanently, the rest are visitors, and in the summer months they get about 1000 people a day.

The best part? There is a sea lion colony that lives on the rocks by the lighthouse. We spent a few hours just sitting and watching them sunbathe, swim and make loud barking noises at each other. We climbed the lighthouse for an even better view over the small town and surrounding water. I could have stayed here another week, curling up by the warm fire each evening and reading by candle light (the hydro and water at our hostel was all solar and wind powered). ​
We wanted to continue East to Punta del Diablo and Chuy, as originally planned, but feared that it would be more similar to La Pedrera at that time of year, because the main attraction is the beach. Instead we decided to head back West. We needed to catch a bus from Montevideo the next day, but instead of spending another night there we stopped in Punta del Este. 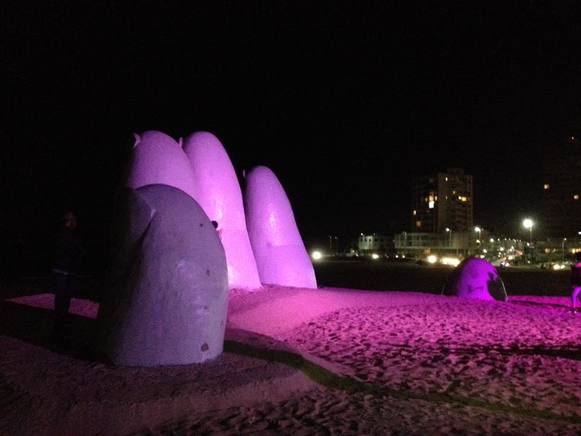 ​Punta del Este is renowned for it's nightlife but we only had about 12 hours, and it was still quiet season, so we opted for a visit to the La Mano (a giant hand sculpture in the sand) and a Carrot Saison at the craft beer bar attached to our hostel.  The next morning we caught our connecting bus through Montevideo and head to our last destination in Uruguay- Colonia del Sacramento.
Colonia is another must visit for Uruguay, and if you are heading to Buenos Aires it is an easy journey to make. The city is small, but the old centre is beautiful. Take a walk through the cobblestone streets of Barrio Historico, past the lighthouse and to the main square. Enjoy the view from the boardwalk of the Rio de la Plata and explore the quaint little churches.

On our final morning in Uruguay, we boarded the Colonia Express ferry for our short one hour journey to our next destination- Buenos Aires, Argentina. All in all, Uruguay is a small gem of the South American continent, with its own history and culture. Modern day Uruguay is ahead of most countries in terms of political progress. Same sex marriage has been legalized for years as well as marijuana legalization and other pressing matters that other countries are still struggling to discuss or pursue. Maybe it has something to do with the limited, if not none existent, input the church has in political matters. If you get the chance to visit, it is definitely worth your time.