Nearby to Skopje, you will find the Matka Canyon. We were able to find a bus that ran from the main bus station directly to the canyon. It took about an hour to travel the 16kms southwest. The turquoise blue waters are beautiful (and a little unexpected). For a reasonable price, you can get a boat ride down the canyon to a small cave that is lit up to highlight the large stalagmites inside. There is also a walking path along the side of the canyon that you can venture down to see the views without so many people around. It does get busy, so try to go on a weekday if possible. 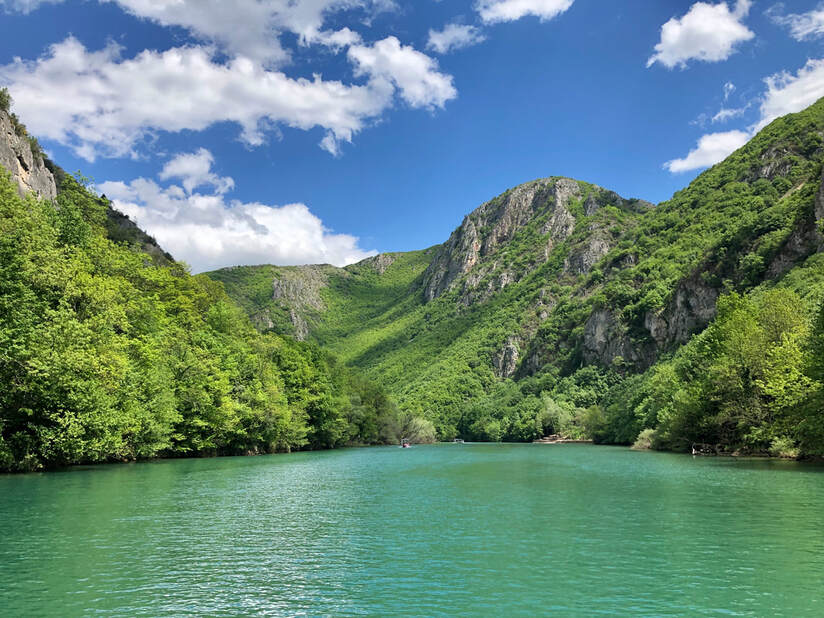 We used Skopje as our base to jump over to Kosovo (read more about that here) and then headed onward to Lake Ohrid. We were pleasantly surprised by what a hidden gem (well, maybe not so hidden anymore) the lake proved to be. The water was a beautiful blue colour, with snow capped hills surrounding it. We used the city of Ohrid as our base to explore the surrounding areas
The city of Ohrid is a treasure chest of sites to explore and discover. We set out on foot and first visited the ​churches and area around around Holy Mary Perybleptos. We headed down the small hill to the Ancient Theater and met two adorable street dogs that escorted us on the walk up to Samuel's Fortress. After exploring the fortress walls, we walked down through the woods to the museum area around Saint Pantelejmon/Saint Clement. If you have a student card, it will go a long way with saving on entrance fees. We headed further down to the water's edge, to the picturesque St. John the Theologian at Kaneo. The views from this church are hard to beat and the small church grounds are a popular attraction on the water. We found the path along the shoreline and walked through the small restaurants, to the wooden boardwalk, back to the main port.​
The following day, we took a day trip by boat to the Monastery of St. Naum. The scenery along the water was breathtaking. It had recently snowed so the tops of the hills surrounding the lake were covered is fresh, white snow and the water below was turquoise. The Monastery was also beautiful, set on a small hill overlooking the water. The resident peacocks greeted us as we explored the small grounds and the church. We had plenty of free time to have lunch, and relax at the nearby beach before catching of boat back to Ohrid. We also stopped to see the Bay of Bones museum, a reconstruction of a settlement on the water. 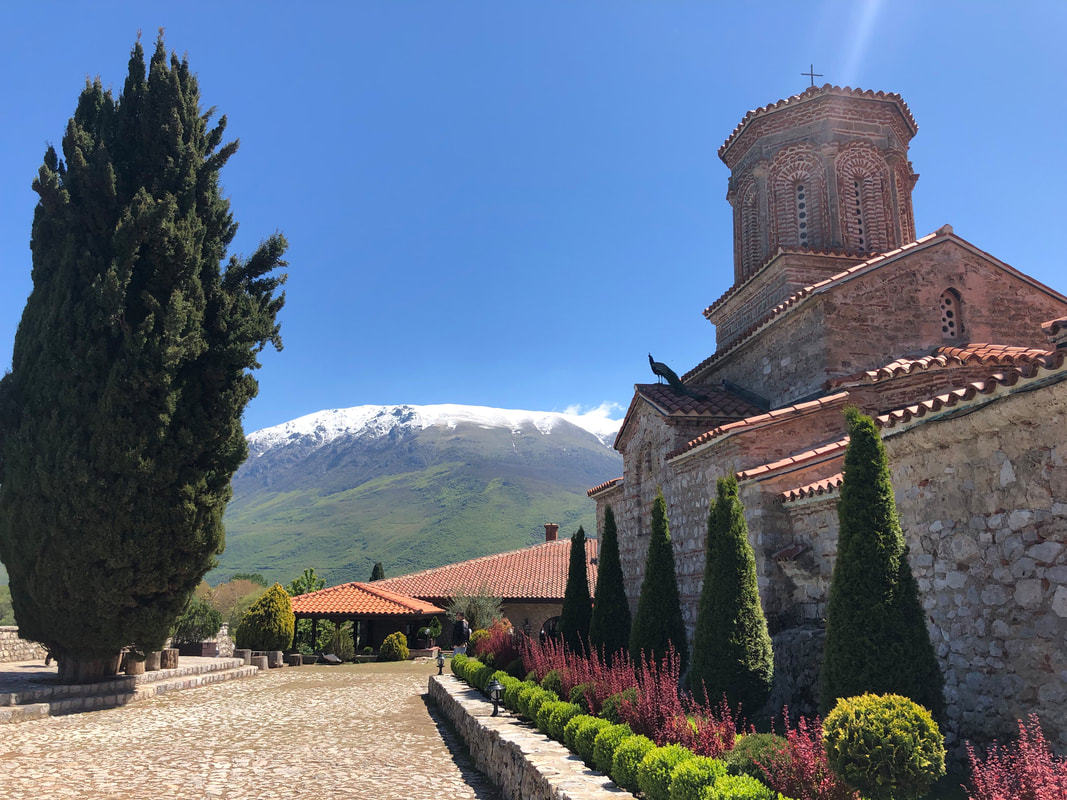 On our final day, we took a bus 70km to Bitola. Our main destination was the remains of the ancient Greek city of ​Heraclea Lyncestis. The city was founded in the middle of the 4th century BC by the king of the Greek kingdom of Macedon. In the middle of the 2nd century BC, Romans conquered Macedon and ruled Heraclea Lyncestis. The site is well preserved, espeically the incredible mosaics that remain uncovered and relatively unprotected by security (except one guy that sits in the building at the entrance). After exploring, we walked into the centre of the town for lunch. There is one main street with plenty of coffee shops to stop and sit at, but not too much else to see.
The only challenge with had with Lake Ohrid was finding the correct information to get into Albania. Every person we asked had different information on how to get there. We were told we could cross the border near St. Naum, but if there was no taxi there to take you to the check point you might end up walking quite far. A few people seemed fairly certain we could get a bus from Struga to Korçë in Albania, so we took a local shared taxi to the bus station to try our luck. When we arrived in Struga the bus station attendant told us there was no bus on that route, so our only option was to take another taxi to Pogradec on the Albanian side of Lake Ohrid. Thankfully the taxis are cheap and we drove the scenic route around the western shore of the lakeand got our final stunning views of North Macedonia.
Questions about travelling in North Macedonia? Email us and we will be happy to help!