From West to East in Slovenia

The Slovene Riviera stretches only 46.6km from Italy to Croatia. It was here, in the small town of Piran that we started our time in Slovenia. Coming from Rovinj, about 80km south in Croatia, there are similarities between the two towns. Within the old town, St. George's Parish Church overlooks the town of Piran below. The view is incredible, topped only by the view of the entire old town from the Walls of Piran- a 7th century town wall fortification. The old town is much flatter than Rovinj, which makes exploring a lot more pleasant, and there is more access to swimming spots from directly within the old town. There is even a nude beach if you manage to walk the treacherous path along the coastline behind the church. Make sure to enjoy at least one meal in the tiny seafood takeaway Okrepcevalnica Cantina. It gets busy, but order a drink from the next door cafe and sit in the square with the other diners while you wait for one of the few tables.
From the coast, we headed inland 74km to the town of Postojna.  There isn't much to see in the town, but we walked the 1.5km down the highway to the main attraction- Postojna Cave. Your cave adventure starts with a ride on the underground train, a 3.7-km-long journey on the world's only double-track cave railway. The cave is 24.3km long but is actually only the second longest cave system in the country, next to the 41.8km long Migovec System. Both caves were created by the Pivka River. A magnificent five-metre-tall bright-white stalagmite called Brilliant is a symbol of Postojna Cave. Inside the cave you can also hear the story of the "baby dragons" inspired by the Olm- an entirely ​aquatic salamander that lives in the waters of the cave.
When purchasing our tickets for the Postojna Cave, we were given the option to bundle the entrance with a visit to the Predjama Castle, only 10km down the road. As we left the cave site, we quickly realized that getting between the two sites wasn't going to be easy without a car. There is supposedly a bus, but of course on that day it wasn't running and locals looked at us like we were crazy when we asked if there was another way to get there. Most people drive themselves or take a guided tour- nobody else was on foot. We started walking down the highway but quickly realized that a 20km round trip on foot was going to be a long and hot, so we stuck out a thumb. Within about 5 cars, a lovely woman and her young son stopped and offered to drive us to the castle.

​Predjama Castle is quite a unique site. The Renaissance castle is built within a cave mouth with a 14km cave beneath it.  There is also a vertical natural shaft, leading out of the original castle to an exit located at the top of the cliff, 25 meters away from the cliff's edge. This shaft allowed Erasmus (lord of the castle in the 15th century and a renowned robber baron) to secretly supply the castle with food in the time of siege and also to continue with his robberies. According to a popular (but unfounded) legend, Erasmus was betrayed by one of his men and was killed by a shot from a cannon while in his lavatory, which was located against the one wall of the castle susceptible to crumbling. The castle was destroyed twice, once by the siege in 15th century and (after being rebuilt) again by an earthquake in the 16th century. In 1570, the castle was rebuilt and remains today. 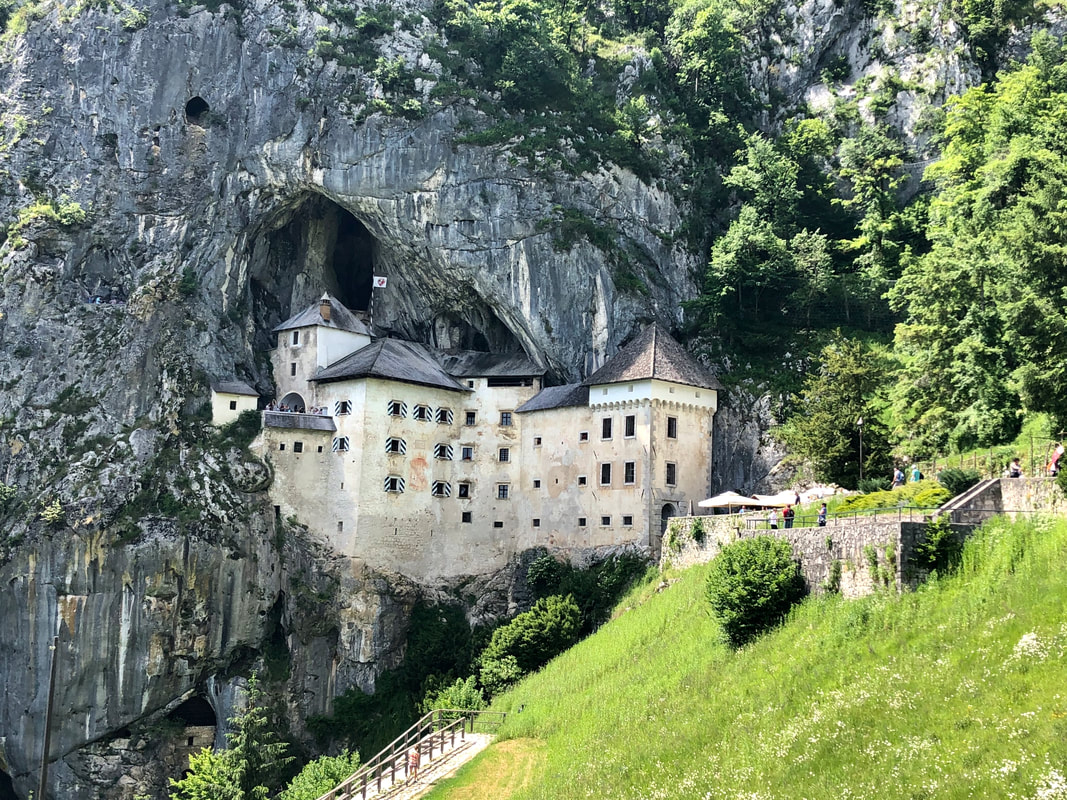 Next we headed inland a further 53km to the capital city of ​Ljubljana. In a vast generalization, capital cities are often busier, more crowded and less charming than small towns. There are usually a few magnificent and iconic landmarks or sites to see, but more people means more shops, high rises and traffic. Ljubljana was a pleasant surprise. For a city we had heard almost nothing about, it was incredibly charming and is a well kept secret of Eastern Europe. The city spills over two sides of the Ljubljanica River with historic bridges joining them. The old town has small cobblestone laneways and picture perfect colourful buildings. To top it all off (literally), a castle sits a top the hill overlooking the city. Then, to completely contrast the old world charm, the Metelkova Mesto artist commune sits near the main train station. Formerly, the site was the military headquarters of the Army of the Austro-Hungarian Empire, Metelkova is now an autonomous social and cultural centre within the city centre. It is one of the largest, and arguably most successful, urban squats in Europe and hosts more than 1,500 alternative events in its illegally occupied buildings. Similarities can be drawn to ​Christiania Freetown in Copenhagen.
From Ljubljana, we did a day trip to the famous Lake Bled. If possible, head there early on a warm summer day so you can walk around the lake before the tourists crowd in and the afternoon heat takes hold. There is a lovely boardwalk walking path around the lake, and the view of the Bled Castle on the shoreline and the Church of the Assumption of Maria on the small island is gorgeous from almost every viewpoint. After completing the 6km walk, you can enjoy a swim in the lake to cool off. There are also a few small grocery stores around the lake so you can stop and grab some food for a picnic lunch.
Our final stop, in the East of Slovenia before crossing the border into Austria, was the city of Maribor, which is actually the second largest city in the country. The small old town leads down to the Drava River, where you will find the Old Vine House and the oldest growing grapevine in the world. The grapevine of Žametovka, a red Slovenian wine grape variety, is about 440 years old. Each year the vine produces a token amount of about 35-55 kg of grapes, which is fermented and put into about 100 miniature bottles.
For a country we didn't know a lot about before visiting, Slovenia provided so many highlights. With a bit more time, there were two more locations in the northwest (Kranjska Gora and Triglav National Park) and two in the east (Celje and Ptuj) that we would have loved to add to our itinerary. But with Slovenia being situated between Italy, Austria, Hungary and Croatia, hopefully we will be in the neighbourhood again sometime soon.
Questions about travelling in Slovenia? Email us and we will be happy to help!