A Week in Serbia

With only a week to spend in Serbia, we started in the countryside and made our way to the bigger cities. Serbia is landlocked by 8 countries: Montenegro, Bosnia and Herzegovina, Croatia, Hungary, Romania, Bulgaria, North Macedonia, and Kosovo. There were several places in the southern half of the country we wanted to visit (like Đavolja Varoš and Gostuša), but having already visited Kosovo earlier in our travels, we were en route to Croatia, so focused on the northern half.
We caught a ride with a local taxi driver from Višegrad across the border to Mokra Gora. We had booked a guesthouse beforehand, and were dropped on the side of a deserted highway with less-than-stellar directions. With no people in sight, we wandered back and forth looking for house numbers until we found something that resembled the photos we saw online. Our guesthouse hosts spoke no English, so asking about the local attractions was challenging at best, but they were so lovely and even brought us some homemade cookies while we settled in.
We wandered back down the main street, admiring the green rolling hills and looking for something to do (or just any other people really). I had read beforehand that there was a small train that took you through the countryside, and we eventually found the station. We bought tickets for the afternoon train ride (on card because we had no local currency) and set out to find an ATM.  We quickly realized that there was nothing larger than a small local food shop within walking distance, so instead headed up the hill to check out the view. 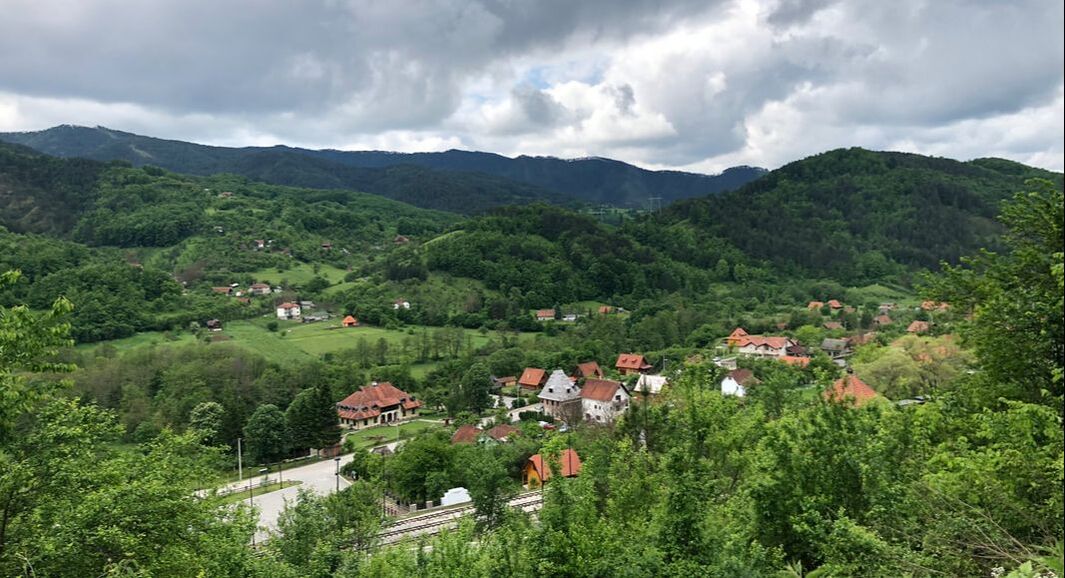 We stumbled across an out of place little village called Mećavnik- Drvengrad. There was a small entrance fee to get in, so we knew it wasn't just a normal town. Thankfully the ticket guy spoke some English and even managed to exchange a few of our Marka for Dinar so we had some cash. We later learned that it is a traditional village that the Serbian film director Emir Kusturica built for one of his films- this is also the same director that built Andrićgrad in Višegrad (more about that here). Mećavnik describes itself as "a town of dreams, a town which has turned an image of utopia into reality". While we were there, it seemed like a place school groups visited to see the traditional Serbian building structures.
We made our way back to the Moka Gora train station for a beer before our scheduled departure time on the The Šargan Eight- a narrow-gauge (760 millimeters in width) heritage railway. The train runs from Mokra Gora to Šargan Vitasi station, a total of 15.4km, including 22 tunnels (totaling 5.4km of the track) and 5 bridges. The other stops include the Ninth Kilometer, Jatare Station, and Golubici Station. Each stop comes with it's own spectacular viewpoint. The Šargan Eight railroad is considered an engineering masterpiece of the time (1922). It managed to connect two railroads- the Serbian railway (from Belgrade to Mokra Gora) and the Austrian-Hungarian Empire railway (from Dubrovnik to Visegrad)- and bypass 300 meters of altitude difference.
The next day we took our backpacks and stood on the side of the highway for several hours, waiting for a bus that was rumoured to pass through the town on its way to the capital, Belgrade. The bus didn't come at any of the times we had been told, but eventually we flagged one down and we were on our way. Since the bus came from across the border, we were able to pay for our tickets with a mixture of Marka and Dinar.
We started exploring Belgrade in The Republic Square, visiting the National theater and the National museum. We wandered through Skadarlija, the Bohemian Quarter, and the oldest part of Belgrade with Ottoman heritage. The oldest public structure in Belgrade is a nondescript Turkish türbe, while the oldest residential house is a modest clay house from 1727. The Bajrakli Mosque is the only remaining mosque in the city . It was built around 1575, and is the only one remaining out of the 273 that had existed during the time of the Ottoman Empire's rule of Serbia.
The main area to explore is around Kalemegdan park, where you can find the Belgrade fortress, the main Zoo, and The Victor- claimed to be the most famous symbol of Belgrade (also known as the Pobednik monument, built to commemorate Serbia's victory over Ottoman and Austro-Hungarian Empire during the Balkan Wars and the First World War). From the river side of the fortress, you can see the confluence of the Sava and the Danube rivers. If you leave the fortress from the south corner, you will find St. Michaels (Saborna) church and one of the main shopping and pedestrian streets- Knez Mihailova.
If you look across the water from the Belgrade Fortress, you will see the smaller town of Zemun (technically now part of the wider Belgrade city, but 14 km away). Zemun was originally called Taurunum and the oldest written record of the present name of the city dates from the 7th century. We took a local city bus across the bridge and headed to Gardoš Tower to see the town from above. We walked through the old streets and down along riverside, where locals gathered with their families in the sun.

Belgrade has quite a good craft beer scene. In Zemun, we had a pint on the rooftop patio of Dogma Brewery. In the old town, we stopped in on a rainy afternoon at Craftory Bar to try the Revolution Brewery beer range. There are several other breweries and craft beer dedicated bars to explore if you want to get the full experience. Comparatively, craft beer is quite expensive in Belgrade, but if you're looking for something a little more interesting to drink it's definitely worth a few extra Dinar.
Our final stop in Serbia was Novi Sad (unfortunately about a month too early to check out Exit Festival, but still great). The old town is beautiful, particularly at night when the buildings are lit up. We stayed just outside the old town and found a small restaurant next door called Kod Šervala. The food was very cheap and very local. The menu wasn't in English however, so we had to just guess and pick something hoping for the best. We weren't disappointed. From the city centre, it is a short 20 minute walk to Petrovaradin Fortress, walking through Dunavski Park and across the Varadin Bridge. Inside the fortress, there is an iconic clock tower and a lovely view of the Danube River.

In our final afternoon in Novi Sad, we took a local bus to the small town of Sremski Karlovci, about 12km away. The quaint town is situated between the Fruška Gora National Park and the Danube River. It is known mainly for it's wine, but the architecture is also magnificent. It is home to several religious buildings, as well as the first gymnasium ever to be founded in Serbia. There is a cross on hill that you can climb up to for a great view over the town, once you find the stairs that lead there.

On our last night in Serbia, we sat at an outside table in front of The Beer Store on Svetozara Miletića. The nights were becoming warmer and people filled the streets buying treats from food vendors and gelato from laneway shops.  We bought a gigantic bag of popcorn from a nearby stall and enjoyed one of life's simple pleasures- drinking a new craft beer in a new country.
Questions about travelling in Serbia? Email us and we will be happy to help!